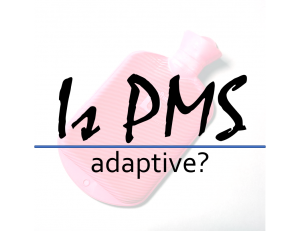 Although further research must be conducted in order to more accurately confirm that PMS increase women’s reproductive fitness, Gillings’ findings causes us to question the common stigma surrounding these symptoms and thus provides insight into their overarching causes. Based on the information presented, it is possible that PMS is not a disease but rather an adaptation that continues to maximize fertility and overall reproductive success.

For more information on the evolutionary advantages of PMS, please listen to our podcast above!

Citation for paper: Gillings, M. 2014. Were there evolutionary advantages to PMS? Evolutionary Applications. 7: 897-904.

Image by: Evolution of PMS group